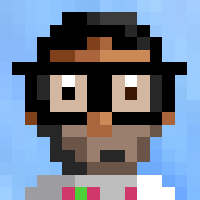 There’s one — a few — lots — even dozens — of good articles that explain the differences between a &str, &'static str, &'a str, String, and &String in Rust.

Most of these start by covering:

and while that’s all important, it can feel like a lot when you’re starting out.

Here, we’ll use an analogy, and look at some code along the way.

Analogies ain’t perfect, but I hope this one makes the topic stick better for some of you. If it does, you can return to those other articles with some intuition.

You run a desk nameplate business for dogs

Bear with me here.

You want to set up a business where you sell plastic desk nameplates for dogs in high places.

To make these nameplates you have two options:

&’static str: point a finger at moulds you’ve committed to

Check you out. You’re smart. You’ve done some market research about dogs, so you know ahead of time that you’ll get lots of requests for “Max”, “Charlie”, and “Rolo” nameplates. For these names, it would make sense to get a stack of steel moulds made up ahead of time.

The name "Rolo" in the code above is a “string literal”: a hard-coded string defined in the binary of your program. String literals are objects with a static lifetime — this means that they will last for as long as our program (or business) is running. You can think of string literals as being like steel moulds, or the laws of the Universe — they are unchanging and unchangeable things that will always be there in memory.

point_finger, on the other hand, is not a string literal: it is a variable that makes reference to the string literal "Rolo". It has the type &'static str:

Imagine you lose your finger in a freak accident. If you plan ahead, then you can still use other methods to point to the right location on the shelf:

So you see, the variable point_finger isn’t static, it just directs us to something which is. Fingers can be created or destroyed.

Getting this “Rolo” mould made up as a string literal required foresight, didn’t it? At compile time, you had to know that you wanted to commit resources (be that money or memory) to the name “Rolo”.

In return, you get certainty. The steel mould will always be on the shelf, and nobody (not even you) can ever move it, hide it, or change it (we say that 'static str are “immutable”).

These constraints could be annoying in some circumstances, but you’re happy because you know you’re going to use this mould a lot.

While string literals are not mutable, &'static str variables are mutable. You can use your finger to point at other things:

Something that might cause confusion: if you type let steel_mould = "Rolo", your IDE will probably display let steel_mould: &str = "Rolo". It says the type is just a &str without the 'static part. Even though your IDE doesn’t explicitly say it, this &str is a &'static str.

Would it make sense to make steel moulds for every dog name that exists? Not if you want your business to stay afloat! Some names will be rarer; they aren’t worth such a specific investment.

If someone comes in and asks for a nameplate for their completely normal dog called “Harambe794524”, then we’re better off sending that to the 3D printers.

There are three steps to sending a dog name to the 3D printers:

They don’t return our note to us — we don’t need it.

We still want to fulfil these orders for weird dog names because we’re a business and we flippin’ love money. This means we need to commit some flexible resources to this task, but we don’t know how many yet.

Could we send the location of a mould to a 3D printing company who are expecting written notes? In other languages, you could totally do this and expect the language to handle the conversions, but in Rust, the answer is rigidly “no”.

Disaster strikes. The 3D printing company started printing one of your doggy nameplates, but the print failed and they already threw your note away. The customer is waiting.

It was “Harambe” something, right? But can you remember the sequence of numbers? Chances are that you’ve forgotten, and what’s worse, you sent (or “moved”) your one copy of the note to the 3D printers, and they don’t give it back!

You can try calling threedee_print(note); again in your program, but the Rust compiler will rightly tell you that you’re trying to do the impossible and re-use a note that you no longer own.

This is the problem with sending a String to a function. As soon as you send your one copy, you’ve lost it. You can’t use it again for anything else.

So, what are your options? Well, next time, you could:

All of these approaches can be used in Rust.

Cloning the note before we send it means we can use the original note again afterwards.

In this case note_copy has “moved” into the function threedee_print, and therefore it is no longer in scope of main.

We haven’t moved our original, so it stays in scope, and so we can use it again.

Asking the 3D printers to return a copy of the note, or the original note, is achieved by modifying the threedee_print function.

We actually have no way of knowing whether the 3D printers have returned the original note, or an identical copy of it. They’ll do whatever is most efficient, and the Rust compiler is exactly the same in this regard.

Worrying about whether we have an original or a copy is academic — we don’t care — we get an accurate note back, and so can now call:

in our main function, and continue to use note_back as we please.

3. Use a reference with &String

Our last option was to put the note up in our shop window, and ask the 3D printers to look at that note and use it as a reference:

The ampersand in front of &original means were’re sending threedee_print a ‘reference to a String’, called a &String.

Using println! in this example isn’t great — println! does a lot of hard work in the backround to be useful, so it will print out the note regardless of whether we pass it an actual note, or point to where the note is (our shop window).

To illustrate what’s happening better, we’ll create a struct called DeskPlate. This struct is not clever like println!; it’s very strict about having dog_name as a String, and it won’t accept anything else.

In the example above, we’ve told the 3D printers to try and create a DeskPlate based on a location (your shop window). Your shop window is not a dog’s name — it is a place where you can find a dog’s name, and so the code won’t compile.

We need to be more explicit. We need to tell the printers to make their own copy of our shop window note by using note.to_owned() or note.clone():

Doing this will make the code compile fine.

Converting between notes and moulds, String and &str

Could we choose to 3D print a nameplate like “Rolo” even though we already have a steel mould? Yes, because we can always look at our mould and write down what we see in a note, converting a &'static str into a String like so:

Converting a String to a &'static str is not so trivial.

The factory that makes steel moulds (i.e. the compiler) can do this, but it only gets run once.

After we’re running though? No chance. The best you can do is to hope that you already have a steel mould that matches your note, like this:

What you’ve done here, is looked at the note, gone into the back room and tried to find a mould that matches your note. If the note says “Rolo”, you’re in luck, because past you was wise. Nice.

Did you get given a name that you didn’t anticipate when you set up your business? Well you ain’t using a steel mould then, matey*.

*Kind of. There are ways to leak the memory of a String to produce a &’static str, but they go beyond the scope of this analogy, and it’s probably not something you’ll do a lot.

String to &’a str: you can do this

A customer with a dog named “Lord Gumzies” is insisting on a moulded nameplate, they do not want a 3D print because “3D prints look all weird and ribbed”.

While you can’t make a new steel mould, you could try and cobble together your own mould out of polystyrene, and leave it lying on the shelf. Your polystyrene mould won’t last as long as a steel one, and it might move.

A polystyrene mould is what a &'a str is. That cheeky 'a thing is similar to 'static from before, and it’s called a “lifetime”. &'a str has a lifetime specifier 'a which tells you how long we can safely point to the polystyrene mould (after that lifetime is up, we’re no longer guaranteed to find it at that location).

Rust’s compiler can often (but not always) figure out how long a variable or reference needs to last for, all on its own. Well done, Rust.

Beware reader, be very ware. The use of the term “str” in the as_str() method doesn’t mean you’re producing a string literal or a &'static str. In fact as_str() will produce a mould with a lifetime which is not static.

A &'static str needs to be a valid reference for as long as our program runs, so the objects it points to must be permanent. If we define an object after compile time, that means that we don’t have a permanent object by definition.

This all matters because if we try to pour hot plastic into our polystyrene mould:

we’re going to end up with a hot mess. Remember, the function hot_plastic is expecting a &'static str — our technician is expecting to be pointed to a permanent steel mould.

Instead, we’ve pointed out a polystyrene mould that “might still be there”, to a technician who is carrying a bucket of piping hot liquid death.

How can we solve this? We need to define a new function, a new role for our technician, one which accepts a &'a str. Here’s one:

We can now pass this function a poly_mould: &'a str and it will work.

Hawk-eyed eagles among you have noticed that the function silicone can be passed a &str, but I told you earlier that a &str in your IDE always means &'static str, didn’t I? Yeah, when you’re defining string literals. If you see the term &str in a function’s arguments, it implicity means &'a str. This switching up of nomenclature will feel natural and totally cool one day, I promise.

Using a &’static str in a &’a str function

We can pass the fn silicone a &'a str, but can we pass it a &'static str? Can we ask our technician to pour silicone into a steel mould?

If you understood how to run a desk nameplate business for dogs, then you understand the logic behind Rust’s approach to string types.

Now go back and try again. Read all of those good articles that talk about the heap, the stack, ownership and lifetimes. Keep this analogy of writtten notes and steel moulds going if it helps you, but drop it once it becomes cumbersome.

You May Also Enjoy